It was a cold, wet and windy night in Edinburgh in November 2016 – a Sunday night where it was just too miserable to go out anywhere. In a flat in the south of the city, as a keen sailor, I had started to construct a Facebook page – I had no plan, no money, no ambition and certainly not a clue at the time as to where this Facebook page would be in a few years’ time.

I have autism – a lifelong developmental condition which affects how people communicate and interact with the world as they see it. One in 100 people are autistic and there is estimated to be over 700,000 people with autism across the United Kingdom. Autism affects people in many different ways and like all, autistic people have their own strengths and weaknesses. So you may ask what purpose and benefit does the charity “Autism On The Water” bring to people with autism?

I grew up in Oban on the west coast of Scotland and was part of a significantly large family of sailors who were all members of Oban Sailing Club. Although I did the odd sailing trip as a youngster, it was only at the age of 13 when I took up the sport regularly after my late father purchased a quarter ton racing yacht “Highpointer”. My family took part in the 2005 Oban Town Regatta where we won our class overall. I hated the sport particularly when it was windy and the boat was heeling over – but never anticipated it ever being a sport which I would one day grow to love. A year later, I was hooked and over the next 12 years became a regular competitor in events such as the Scottish Series, West Highland Week and the Round Mull Race and even had stints at racing abroad such as the Tjorn Runt in Sweden, the round Hong Kong Island Race and the Volvo Dun Laoghaire Regatta in Dublin. Throughout my sailing career, I found that sailing had become a life changer in the way of how I managed and accepted my own autism for the benefit of both myself and others – the sport had taught me many skills but three particular skills which helped me overcome my own personal troubles with autism which were confidence, problem-solving and social skills. After attempts at University and College were found to not be for me – I decided to research other sailing organisations across the country that provided for people with autism, there is of course Sailability, Blind Sailing, Ellen MacArthur Cancer trust, but there was nothing specifically for autism. It was one of the reasons that I unexpectantly set up Autism On The Water. 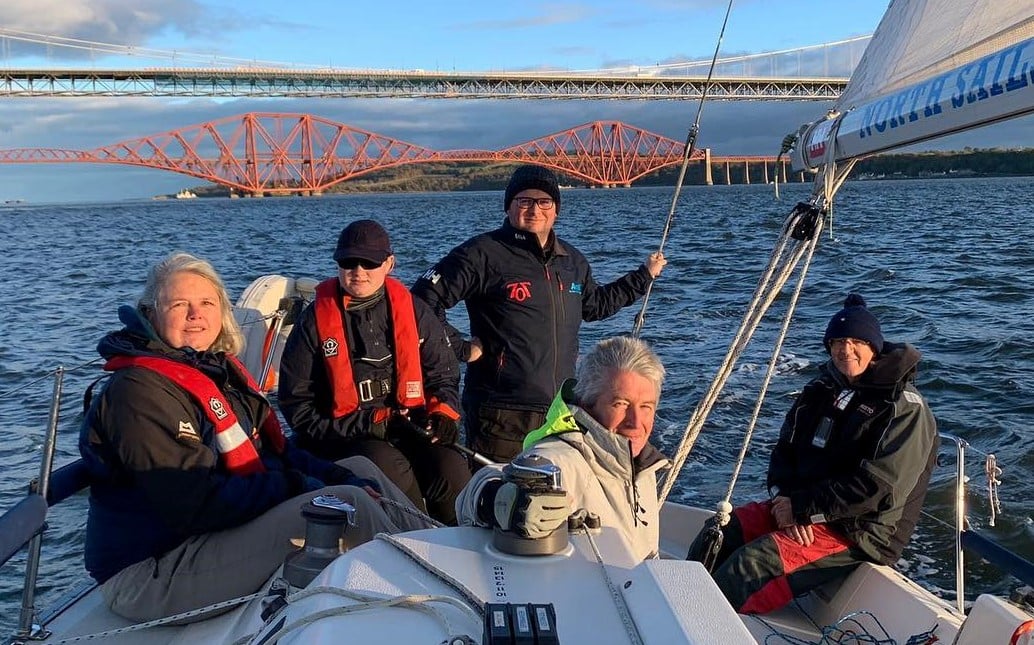 The idea was originally billed simply as a awareness campaign to tell my own story and journey of how sailing had benefitted me as a person with autism and to show the sailing community that autism like for so many sports and activities prove that there are no barriers to stop or prevent people from accessing the sport. Since the organisation was born on that wet and windy night in Edinburgh, Autism On The Water has gone from being a small awareness campaign into a growing registered charity with a social media following of nearly 12,000 followers across the world.

The charity’s prime goals are to increase awareness of the autistic spectrum through sailing and boating in general and help encourage people with autism to access sailing which as it did for me, can help people achieve confidence, problem-solving and social skills. Autism On The Water throughout its operations has helped over 120 people with autism access sailing whether as a simple sailing outing or a relaxed trip through the beautiful Crinan Canal in the Argyllshire district of Scotland.

The charity owns two yachts – a Hunter 707 which is a small racing yacht that is campaigned across Scotland on the one design circuit to market, promote and raise awareness of the charity – and a Colvic Victor 34 yacht called Confidence. Confidence was purchased in late 2020 after a remarkable fundraising effort which saw the charity raise the funds to purchase the yacht in 27 hours! Confidence is the charity’s main yacht that provides free sailing trips to all ages on the autistic spectrum. The boat is fully equipped for 8 passengers and two crew and has the bonus of having indoor steering for young people to still experience sailing from the shelter of the cabin.

Autism on the Water also has a strong international reputation which is largely thanks to the charity’s ambassador David Witt. David is skipper of Sun Hung Kai Scallywag – a international sailing team which represents the city of Hong Kong. I met David during the 2017-18 Volvo Ocean Race in Hong Kong where Scallywag sailed to a well-deserved victory in their home port. I gifted David an Autism On The Water wristband and within a matter of weeks later during the long leg from Hong Kong to Auckland in New Zealand, David spoke live from the boat about Autism On The Water having just recently discovered that his nephew had been diagnosed with autism. David continues to be heavily involved with Autism On The Water and has even travelled to Scotland to race on the charity’s Hunter 707 with great success. One very special moment for the charity through our friendship with Scallywag is the promotion and awareness that David took across the globe, one in particular in New York where a young family encouraged their autistic daughter to go for a sail after hearing about the charity through Scallywag’s promotion – the young girl was 7 years old at the time and when she first went sailing, she spoke verbally for the first time in her life!

In summer 2022 – Autism On The Water is embarking on perhaps its most biggest adventure so far. Both our yachts are leaving Scotland for a few months and heading for the waters of the Solent on the south coast of England entitled “The South Coast Adventure”. The campaign will see the charity’s Hunter 707 take part in the iconic Round the Island Race around the Isle of Wight as well as the Classic Cowes Week. Confidence will also make the journey south and provide opportunities to people with autism both from Scotland and also across England, Wales and Ireland to experience what Autism on the Water works and tries to achieve for local communities. Confidence will be taking centre stage during Cowes Classic Week organised by the Royal London Yacht Club in Cowes where both Autism On The Water and the UKSA have been chosen as charities of the regatta. The campaign is intended as a trial period with the intention in the future of expanding the charity on the south coast. The Solent has long since been the capital of yachting in the UK and already, Autism On The Water has had significant support and interest with this campaign especially with our main sponsor GJW Direct who have been working with the charity tirelessly over the last 5 months to bring this campaign to life.

Whether you live in our home base of Scotland or on the south coast of England, we encourage you whether autistic or not to come and find out more about Autism on the Water and learn about what we do. Please visit our website www.autismonthewater.co.uk and our Facebook page www.facebook.com/autismonthewater or email aotwofficial0@gmail.com for any information you might want.

We are looking forward to spreading our work across the South coast this summer!

GJW Direct is a trading name of Munich Re Specialty Insurance (UK) Limited, registered in England: 01262636, Union, 2-10 Albert Square, Manchester, M2 6LW. Authorised and regulated by the Financial Conduct Authority (FRN 310539) and acting as a managing general agent on behalf of certain insurers.